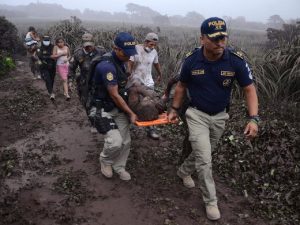 At least 25 people are dead and countless injured after Guatemala’s Fuego volcano erupted on Sunday.

The blast spewed a river of red hot lava and gushed thick clouds of smoke nearly six miles into the air, affecting 1.7 million people. When released into the atmosphere, this toxic gas can potentially change the temperature of the planet and become a global health concern.

There could be new eruptions, and residents in the surrounding areas should be on alert for mudslides containing volcanic material. Volcanic ash had spread in a 12-mile radius and winds could carry the cloud even farther, officials said.

INTERVIEW VOLCANOLOGIST DR. PETER WARD, WHO PUT THE FIRST SEISMOGRAPH ON FUEGO IN 1972 & WAS ON THE MOUNTAIN WHEN IT ERUPTED IN THE EARLY 70’s.

According to the U.S. Geological Survey (USGS), volcanic eruptions release sulfur dioxide into the stratosphere, which leads to global cooling by converting into sulfuric acid, which condenses and forms sulfate aerosols that reflect sulfate radiation back into space. Source.

Guatemala’s national institute of volcanology, Insivumeh, warned people to keep away from the affected ravines as there is a possibility of “a reactivation”. The institute also warned of the possibility of lahars – when water mixes with volcanic deposits forming a destructive debris flow – which could affect villages and hamlets to the south, south-west and south-east. Source.