WHEN RISK BECOMES REALITY ON THE BIG ISLAND 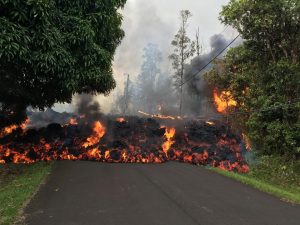 If you haven’t seen the latest weather phenomenon that is the eruption of Hawaii’s Kilauea volcano, you must be sleeping under a rock. (No pun intended).

At 5 pm on Thursday, May 3, fissures opened in the ground slicing through Leilani Estates on the East Rift Zone of Kilauea volcano in Hawaii. Lava fountained as high as 150 feet. Within 5 days, 15 fissures opened, lava covered 116 acres, 1700 people were evacuated, and 37 structures were destroyed

Poisonous sulfur dioxide gas is causing severe respiratory problems throughout the region. The last eruption of this type in 1955 lasted for three months. USGS volcanologists warn that a life-threatening explosive eruption unlike anything seen since 1924 could occur by mid-May.

“This is the latest phase of an eruption that has been ongoing since 1983,” explains Dr. Peter Langdon Ward,“the longest-lived historical eruption in Hawaii. Risk remains high.”

Ward should know. He climbed his first active volcano at age 19 and first studied Kilauea volcano at age 23. Now retired after 27 years working as a volcanologist for the US Geological Survey, Ward has become the global expert on how major basaltic lava flows caused periods of major global warming, ocean acidification, and mass extinctions throughout Earth history.

IN AN INTERVIEW/ARTICLE, DR. WARD CAN DISCUSS:

1. What is happening and what is likely to happen at Kilauea volcano in Hawaii?

Previous Post: If you wonder logically, you are doing science