Click here to check out why greenhouse-warming theory is physically impossible
DO YOU WONDER..
What Actions We Should Take Right Now to Reduce Human-made Warming?

We need to help the ozone layer recover to concentrations common before 1970 in Antarctica, the Arctic, and throughout mid-latitudes. Here is why.

Global warming of 0.6 oC from 1970 to 1998 was caused by production of chlorofluorocarbon (CFC) gases used widely for refrigerants, spray-can propellants, solvents, and foam-blowing agents. When the Antarctic ozone hole was discovered in 1985, political leaders at the United Nations and scientists worked promptly to pass the Montreal Protocol on Substances that Deplete the Ozone Layer in 1987. This protocol mandated major cutbacks in production of CFCs beginning in 1989. The increase in CFC concentrations in the atmosphere stopped in 1993. The increase in ozone depletion stopped in 1995 and the increase in temperatures stopped in 1998 as shown in the plot in the left part of the header above. 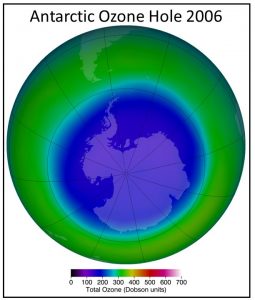 As long as the ozone layer remains depleted compared to levels before 1970, ocean heat content will continue to rise, ocean temperatures will continue to rise, glaciers will continue to be sublimated and to melt, sea level will continue to rise, and storms are likely to become more severe. Air temperatures, however, are not expected to rise significantly because, as shown in this graph, they are observed to increase only as long as ozone depletion is increasing. This is because the primary effect of ozone depletion is to increase the amount of solar ultraviolet-B radiation reaching Earth, where it dissociates ground level ozone pollution, heating the air most efficiently in populated, industrialized regions containing the most ozone pollution. Ultraviolet-B also penetrates oceans hundreds of meters, efficiently increasing ocean heat content.

CFC gases were very safe to use and popular because they do not interact with most substances. But when they rise into the stratosphere, CFCs can be dissociated by very high energy solar ultraviolet radiation, ultimately releasing atoms of chlorine. Under very cold winter conditions in the lower stratosphere, one atom of chlorine can lead to destruction of more than 100,000 molecules of ozone. It takes 5 to 7 years for a molecule of CFC to rise into the stratosphere and it can remain there for as long as a century.

The Antarctic ozone hole is recovering very slowly. It is expected to reach pre-1980 levels by around 2075. While the size of the Antarctic ozone hole was only 9.2 million square kilometers in September 2019, the smallest area since 1984, this is thought to be an unusually low spike similar to 2002 and 1988 shown in the plot in the central part of the header above. 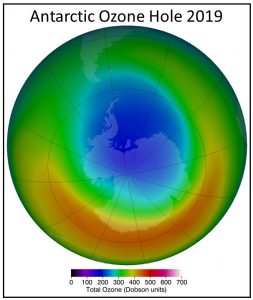 The Montreal Protocol is one of the greatest success stories of international environmental diplomacy, stopping the increases in ozone depletion and global temperatures within a decade after it took effect in 1989. The world would probably be another half degree warmer if it had not been for the Montreal Protocol. But there are significant problems remaining that we need to take care of.

While there were alternative gases that did not deplete ozone, converting existing air conditioners, refrigerators, and freezers to use these gases cost hundreds of dollars for each home-sized unit and for each automobile. A major feature of the Montreal Protocol was to phase out CFCs faster in developed countries. This led to a thriving black market for CFCs legally manufactured in developing countries but illegally diverted to developed countries for maintenance of existing equipment. By the mid-1990s, CFCs were the second largest illegal import via Miami, second only to cocaine. Illicit trade in ozone-depleting substances has been a significant problem, slowing recovery of the ozone layer. More effective enforcement could have major benefits for Earth’s climate.

In 2010, production of CFCs became illegal in China. In 2018, however, scientists measured atmospheric concentrations of CFC-11 in eastern China that suggested a major increase since 2012. The Environmental Investigation Agency traced the source to at least 18 factories producing polyol blend rigid foam used widely for insulation of buildings. The manufacturers admitted that they knew CFC use was illegal, but it was cost effective and it was utilized by all their competitors. After this illegal manufacturing attracted international attention, the Chinese government has improved enforcement of the Montreal Protocol.

There are still large numbers of air conditioners, refrigerators, freezers, and some fire extinguishers that use CFCs, especially in the developing world. The CFCs in these units need to be captured and disposed of safely. Plus new laws go into effect in 2020 to eliminate HCFCs used in refrigeration units built before 2010. CFC and HCFC refrigerants are prolonging the depletion of the ozone layer and increasing the long-term warming of Earth. We need to take enforcement very seriously.

Ozone is also depleted by volcanic eruptions but returns to normal within years after the end of basaltic lava extrusions such as Bárðarbunga in 2015 and within a decade after major explosive eruptions such as Pinatubo in 1991 as shown in the plot in the right part of the header above. There is not much we can do about volcanic eruptions, but luckily those that affect climate in major ways are very, very rare.

As we burn more and more fossil fuels it is very important that we reduce air pollution. The World Health Organization (WHO) estimates that 4.2 million people die prematurely each year due to ambient air pollution, which is worst in China, India, southeast Asia, and Africa. More than 91% of the world’s population already lives in places exceeding WHO air quality guidelines. We know how to minimize air pollution. We have the technology. We just need to consider health a high priority.