How Will the Trump Administration Treat Climate Change? 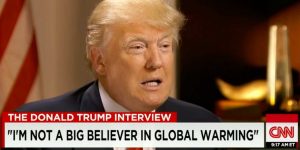 In political campaigns it is often hard to distinguish fact from fiction and the subject of climate change is no exception.

The policy on climate change will sharply change under the Trump administration as the president elect has vowed to dismantle the Environmental Protection agency in almost every form.  (Source)

What does this mean for our country?

We have heard polarized debates on this issue…but Americans need to know the truth.

Dr. Peter L Ward of the US Geological Survey, retired.

Peter L Ward, a long time government geophysicist, has spent ten years carefully reexamining the physics of global warming. His discoveries show volcanoes play an important role in climate change and this new data could effect decisions made in Washington.

Dr. Ward is stressing how important it is for America to know the facts & have a plan!

Ward’s analysis and theory are explained in detail on his website and in his new book “What Really Causes Global Warming? Greenhouse Gases or Ozone Depletion?”