The Ozone Layer: Not the Only Thing with Holes 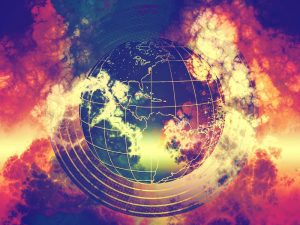 Of all the hotly debated topics in the world, climate change is still one of the most important. Scientists have questioned the cause for years, and new research finds more holes in the greenhouse warming theory than ever before.

At the forefront of this research is climate scientist Dr. Peter Ward of the US Geological Survey, retired. His new observations and data show that there are flaws in the theory that cannot be overlooked and he wants the public to know how this will affect us.
So what’s the flaw?

C02 does not absorb enough heat to warm the world. Manufactured and volcanic gasses, however, are observed to deplete the ozone layer, allowing more high-energy sunlight to reach Earth. Ozone depletion explains observations of climate change throughout Earth history much more directly and in much greater detail than greenhouse-warming theory.

History: Manufactured CFC gases, which became popular in the 1960s as spray-can propellants and refrigerants, caused depletion of the ozone layer resulting in substantial global warming. The UN Montreal Protocol, effective in 1989, mandated cutbacks in CFC production, stopping the increases in ozone depletion by 1995 and stopping the increases in temperature by 1998. The ozone layer has been very slow to recover, however, because there is still a large black-market in CFCs and because there have been recent, rapid increases in short-lived ozone depleting substances, such as dichloromethane, that are not regulated. Prompt action is needed.
‘As long as ozone remains depleted from 1970 levels, the ocean will continue to warm, ice will continue to melt, and the recent acceleration in sea-level rise since 1998 will continue.”
IN AN INTERVIEW / ARTICLE, DR WARD CAN DISCUSS:

Ward’s analysis and theory are explained in detail on his website and in his new book, “What Really Causes Global Warming? Greenhouse Gases or Ozone Depletion?”