Current Political Trends May Give Credibility to Claims Made by Dr. Peter L Ward that Greenhouse Warming Theory is Physically Impossible

Dr. Peter L Ward, an independent scientist trying to bring awareness to the faults of the greenhouse warming theory, shares why the current economic and political disparities in France & Poland give credibility to his claims. 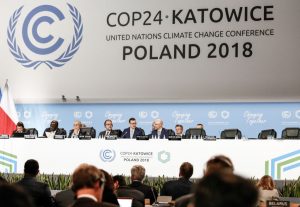 (Photo by: NurPhoto—NurPhoto via Getty Images)

As the world attempts to come to an agreement on the future of climate change at the UN climate conference in Poland, violent protests on the streets of Paris have echoed a different voice in uniting this ongoing opposition. Implementation of the 2015 Paris Agreement is at stake, which aims to lower greenhouse gas emissions globally to limit the worst effects of climate change.
Yet riots in France just forced the French government to scale back its carbon tax meant to limit greenhouse-gas emissions. Many politicians around the world who are trying to do something about greenhouse gases are not getting re-elected.
“Greenhouse warming theory is currently causing widespread economic and political damage rationalized by science that is turning out to be mistaken,” says Dr. Peter Ward

Most climate scientists are convinced beyond a reasonable doubt that greenhousewarming theory provides the primary explanation for observed global warming. Nearly all nations in the world agreed in Paris in 2015 to work together to reduce greenhouse-gas emissions. Right now, December 2 to 14, envoys from almost 200 countries are meeting in Katowice, Poland, at the UN Climate Conference COP24 to develop written guidelines for implementing the Paris Agreement.

The Trump administration’s withdrawal from the Paris Agreement — though not yet in effect — has left a leadership void that others are scrambling to fill and expanded the opportunity for China to shape global policy. Meanwhile, Brazil’s new government is signaling a similar shift away from climate goals.

“Don’t you think we should re-evaluate the science promptly before more damage is done?”

…asks Ward, who has worked full time for twelve years at his own expense, driven by his own curiosity, re-examining all the assumptions made in greenhouse-warming theory. Ward handed out materials at the booth of “Science Is Never Settled” in the Exhibit Hall of the annual meeting of the American Geophysical Union in Washington DC this week. Ward has typically interacted with more than 500 scientists at 12 such major meetings over the past four years.

“It turns out that there is a fundamental misunderstanding concerning thermal energy, heat, and temperature,” Ward explains, “that goes back several hundred years. Current equations for heat work fairly well when there are small differences in temperature. When analyzing climate, however, Sun is 20 times hotter than Earth. Because of this large temperature difference, current equations for heat grossly overestimate the warming effects of terrestrial radiation absorbed by greenhouse gases.”

“How much more economic and political damage must be done before scientists recognize this mistake and help civilization deal with this new reality?

Ward has summarized the relevant science very succinctly at Physically-Impossible.com. He encourages everyone to examine that web page carefully to analyze the physics described.

Dr. Ward worked 27 years with the United States Geological Survey as research geophysicist, branch chief, and program manager. He helped develop and manage a major national research program, chaired a committee at the White House, testified before Congress, worked on a committee for Vice President Gore, published more than 50 scientific papers, and won two national awards for explaining science to the public. He retired in 1998, working intensely for the past decade trying to resolve several enigmatic observations related to climate change.