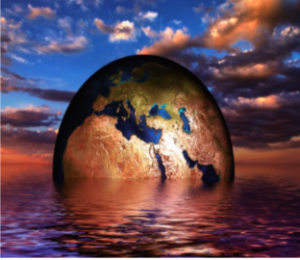 Climate change is real but new research claims humans aren’t the only culprit.
Many scientists are debating just how much nature has to do with the rising temperatures. New studies show volcanoes play a major role in heating the earth.

Interview climate scientist Dr. Peter Ward to get the facts on this emerging theory.

The Science Behind The Story
All four major analyses of global surface temperatures agree that the world warmed at least one degree Fahrenheit from 1970 to 1998 and then warmed another half degree since 2013 at a rate nearly 5 times faster. Such warming can only be caused by adding heat to the earth-atmosphere system. Most of this heat is stored in the oceans. Ocean heat content has been rising consistently since 1970. Where is this heat coming from? Greenhouse gases simply do not absorb enough heat to play the major role in global warming, but there is another well-documented source.

The ozone layer, 12 to 19 miles above Earth, absorbs ultraviolet-B radiation, the highest-energy solar radiation reaching the lower stratosphere. When the ozone layer is depleted, more of this h-energy radiation is measured to reach Earth’s surface, increasing our risk of sunburn and skin-cancer. Since 1970, ozone depletion has been observed clearly in the Antarctic Ozone Hole, the Arctic, and, in lesser amounts, throughout mid-latitudes. Temperatures on the Antarctic Peninsula rose 12 degrees from 1951 to 2003, more than observed anywhere on Earth in the past 1800 years.

Global warming from 1970 to 1998 was caused by humans manufacturing CFC gases, known to deplete the ozone layer. The increase in global warming was stopped in 1998 by the UN Montreal Protocol mandating a phasing out of CFC gas production beginning in 1989.

Icelandic Volcano Heats Up the Earth

Warming beginning in 2014 was caused by the eruption of Bárðarbunga volcano in central Iceland. Starting in late August, Bárðarbunga extruded 33 square miles of basaltic lava in merely six months, the highest rate of basalt production since 1783. Voluminous basaltic lava flows covering tens to millions of square miles have been contemporaneous throughout Earth history with periods of major warming and major mass extinction. Chlorine and bromine gases emitted by basaltic lavas deplete the ozone layer. Basaltic volcanism in Iceland from 11,750 to 9,375 years ago warmed the world out of the last ice age. The eruption of Bárðarbunga caused 2016 to be the hottest year ever recorded by thermometers.

Climate models overestimate the heat contained in infrared radiation and underestimate the heat contained in ultraviolet radiation. In other words, they overestimate the role of greenhouse gases and underestimate the role of ozone depletion. The mathematics, developed by Arrhenius 120 years ago, is based on a fundamental misunderstanding in physics concerning radiant energy. We now know that radiant energy is simply a function of frequency of oscillation of the bonds holding the radiating matter together, not a function of wave amplitude and bandwidth as currently calculated in climate models.

Scientists Call for an Experiment

Scientists have never demonstrated in an experiment how much air is warmed when concentrations of carbon dioxide gas are increased. Experiments are fundamental to the scientific method. As Steven Chu, Nobel physicist and former Secretary of Energy wrote “The final arbitrator of any point of view are experiments that seek the unbiased truth.”

The only experiment reported in the scientific literature concerning greenhouse gases was done in 1900 by a physicist, Knut Ångström. He showed, in two different ways, that warming caused by increasing concentrations of carbon dioxide is minimal.

In 2017, scientists need to carry out such experiments if they wish to defend greenhouse-warming theory (JustProveCO2.com). Such experiments are so unlikely to be successful that I am offering $10,000 to the first scientist who can do such an experiment successfully (WhyClimateChanges.com/challenge/).

Ozone depletion remains at much higher levels now than in 1970. Therefore, ocean heat content will continue to rise and glaciers will continue to melt, but the major global warming predicted by climate models is highly unlikely. We need to be concerned about ozone depletion, not increasing concentrations of greenhouse gases.

These new scientific data and insights show that we should be able to move forward together burning fossil fuels safely, minimizing pollution, and meeting the rapidly increasing energy needs of a rapidly developing world. It also makes sense to work together developing renewable sources of energy because fossil fuels are unlikely to last more than a few generations and because renewable energy sources are beginning to make economic sense, especially in regions lacking major energy distribution infrastructure.

Ward’s analysis and theory are explained in detail on his website and in his new book “What Really Causes Global Warming? Greenhouse Gases or Ozone Depletion?”